Apple AirPods owners have a problem. By batteries it is not equipment for many years

The subject of the declining performance of lithium-ion batteries affects virtually every equipment equipped with these cells. Those who are the ones who decided to buy Apple AirPods earphones are the ones who are most convinced about it. In short, it is not colorful.

The issue of degradation of lithium-ion batteries is nothing new – from year to year, their efficiency is gradually falling and the appropriate methods of charging or caring for a cell can slow down this process, but they certainly will not stop. While in smartphones or larger devices this problem can be solved simply by replacing the battery, so much more problems have holders of very small devices, such as wireless headphones. The owners of AirPods are convinced about this, who have supplied this equipment shortly after their premiere.


AirPods – the battery runs out in the blink of an eye

It turns out that individual users report problems with a very short battery life – one of the Americans said that the headphones are no longer use, because if at the beginning they functioned on one charge for about 5 hours, now is the time their activity is only … half an hour. The similar conclusions came several days ago editors of the Apple Insider website , who compared the pair of AirPods from 2016 with the same model purchased last year. The result was that the older version allowed you to listen to music for only 2 hours and 6 minutes. 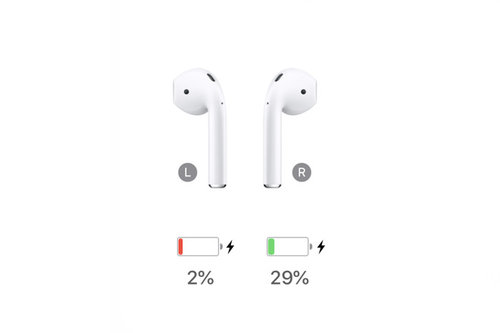 It is interesting to note that more than two years of AirPods could not be fully charged – the maximum energy level is 98-99%, while the case still allowed the maximum energy level to be packed. What, however, undoubtedly draws attention is the fact that the headphones lose the stored energy at a different pace. After two hours of listening in one of the tested headphones was only 2% of energy, while in the second – 29% . Importantly, the difference also appeared in the newer model, although it was slightly smaller – at the same time one for the headphones had 67% of the battery, while the second – 62%. What is the difference? Most probably, it is guilty that only one of the headphones has a built-in microphone, so it is used to a greater extent during conversations, which causes the battery to degrade faster. It is also possible that Apple technology transmits music to one of the headphones, and then it is transmitted to the other. Anyway – the difference is very visible.


Repair is a fun way

In the case of Apple headphones, this is a troublesome situation, because the costs of replacing batteries in the handset are quite big – the Polish version of the Apple website is silent on the subject, but abroad it is as much as $ 69 per item when it comes to post-warranty repair ($ 49 in the course guarantee). This is really a lot of money, because in exchange for PLN it is over PLN 200. The AirPods user is definitely not light (and cheap). Let's hope the second generation of AirPods will be a bit more durable … source