Does twice cheaper Xiaomi Mi 9 compare performance with top Samsung Galaxy S10 +? Compare the results of several independent speed tests and see if the differences are clear enough to indicate the winner.

Xiaomi Mi 9 and Samsung Galaxy S10 + debuted on the same day, differing primarily in price – the first one we buy in Poland for twice as small money than the other. In addition to the amount, the specifications of both flagships are different in several aspects, but their common denominator should be impeccable performance. Both the Mi 9 and the Galaxy S10 + were equipped with leading processors whose speed was checked by several unrelated testers. Before we go to the description of processors and results, it is worth paying attention to prices. Xiaomi Mi 9 in the 6/64 GB version costs PLN 1899 , while the Galaxy S10 + began its conquest from the 8/128 GB variant and the price of PLN 4399.

Samsung Galaxy S10 + was equipped with one of two processors: Qualcomm Snapdragon 855 or Samsung Exynos 9820. In the Polish sale, we meet only the second variant. Exynos 9820 is a hellishly powerful unit based on the Samsung M4, Cortex-A75 and Cortex-A55 cores, which together form an octahedral system made in the 8 nm lithographic process. The maximum clock speed reaches 2.7 GHz, and Mali-G76MP12 is responsible for the graphic experience. It supports 8 or 12 GB of RAM. 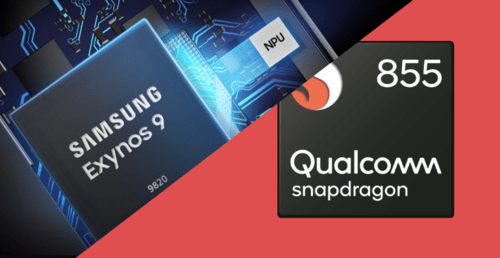 The Xiaomi Mi 9 uses a single chipset, which could only be an efficient Snapdragon 855. It was made using lithographic 7 nm technology and equipped with Kryo 485 octa-core processor with a maximum frequency of 2.8 GHz. On board there were also Adreno 640 graphics and 6 or 8 GB RAM for help.

The first test tested the performance of the Mi 9 equipped with 6 GB of RAM and Galaxy S10 +, which operated the Exynos processor combined with 8 GB of operating memory: https://www.youtube.com/watch?v=Z-JZqyz99aA The test consisted of simultaneously opening sites and applications and checking which of the phones uses components better and has a lower tendency to cut. As it turns out, in most cases the differences were marginal , and in some cases even in favor of Xiaomi, which was awarded twice as many points (12: 6). In the second competition it was about the fastest cache and calling applications running in the background, what better deal with Samsung's smartphone (11: 9).

Similar results can be found in the next test, which is based on the inclusion of a stopwatch and the fastest execution of a number of tasks, operating on the same set of applications: https://www.youtube.com/watch?v=OrD_tWQFRDs Excluding human delays, Xiaomi flagship coped a few seconds faster and showed much greater efficiency in synthetic tests. In AnTuTu the smartphone from China scored 370343 points , while the Galaxy S10 + boasted the result of 332863 eyeballs . If, however, you thought that Xiaomi would be better in everything, the result in Geekbench effectively brings to the ground – Mi 9 reached 2879 and 10022 points , and the Galaxy S10 + easily showed off with the points 4526 and 10084.

For one of the most accurate tests, we can recognize Speed Test G, which was carried out by Gary from AndroidAuthority. In this case human errors were eliminated and smartphones were checked on the basis of the prepared algorithm: https://www.youtube.com/watch?v=vNV0JVAzpaQ Galaxy S10 + showed off better, although the difference to Mi 9 was minimal and was 2 seconds in favor of Samsung . At this point it is worth mentioning that both smartphones used the Snapdragon 855 processor.

Looking at the results of three independent tests, one can get the impression that the higher price does not really play the first violin. In this case, speed differences either do not occur or are almost imperceptible, so if you count only on the performance of the smartphone, choose the Mi 9. Galaxy S10 + is equally fast, but by the way offers a bunch of other possibilities: one of the most accurate cameras, the best screen on the market and a waterproof case with a headphone connector. This brought a significant increase in value. Mi 9 contains only a few of these features, but its powerful advantage is the low price. Nearly PLN 2,000 for an almost complete device at a rate of twice the price of competition is an unbeatable argument. The final choice of course belongs to the customer, so I recommend you consider other comparisons and customize your own needs for one of the above smartphones. So, which one do you choose and why?


Important texts about both flagships:

Samsung Galaxy S10, S10 + and S10e officially! Check whether it was worth waiting for