Who would have expected: Samsung Galaxy S10 + faster than the iPhone XS Max!

Apple iPhone XS Max and Samsung Galaxy S10 + have met themselves in the speed test. Both smartphones are direct competitors, so take a closer look at this clash of titans. The comparison ended with quite clear victory … Samsung flagship. Surprised?

PhoneBuff carried out a speed test in which Samsung Galaxy S10 + and Apple iPhone XS Max competed with each other. In comparison, the Galaxy S10 + took part with the Snapdragon 855 chip , while the iPhone has an Apple A12 Bionic on board. Here are the specs of the test specimens:

The confrontation was based on two rounds, one of which is based on starting a set of the same applications in the same order, and the other on re-invoking them from the main memory. Thanks to this, we learn how smartphones not only deal with the inclusion of individual programs, but also with multitasking. The first round was even and the Galaxy S10 + lost it a bit more than 4 seconds , which is quite a bit . Samsung's flagship had a big problem with loading the file in the Word application, and then he was no longer able to catch up with his rival. It's good that it was not a PDF, because the defeat would be total;) In the second round, the iPhone XS Max maintained its advantage for a long time, but when it came time to recall from the memory of the application, it was reloaded, like all other programs. Meanwhile, the Galaxy S10 + did not have such problems, thanks to which he not only recovered, but also overtook his opponent and won the entire test by almost 16 seconds . 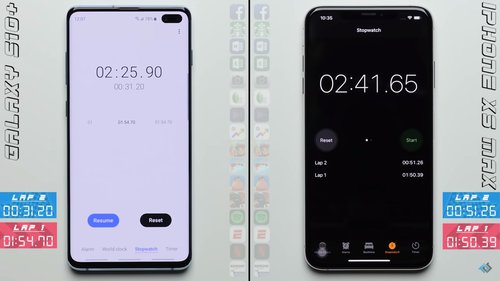 Of course, this type of speed test for many people is completely meaningless. I sincerely doubt anyone will give up buying a loser for the winner (and possibly the other way round). Most users have rather different priorities , including a camera, system or appearance that is more important than a 16 second difference in any test. However, I would pay attention to one thing. The comparison shows that a large amount of RAM is not just a blind rush behind the numbers , because in practice you just see the difference. Especially, it should give the mind to those who are convinced that the iPhone and iOS do not need as many gigabytes of operating memory as Android phones. iPhones are not cheap, so the appearance of 6 GB RAM in Apple's flagship from 2019 will be very welcome.