Here is the Polish price of the Nokia 9 PureView. A flagship with a penta-camera does not have to be expensive

Nokia 9 PureView will appear in Poland in a month, but its price has been revealed now. The first smartphone in the world with a penta-camera has been reasonably priced – Nokia knows that a smartphone with last year's Snapdragon processor can not cost the kroci. Are you trying to buy Nokia 9 PureView?

Nokia 9 PureView in Poland – what price?

The Nokia 9 PureView smartphone presented at MWC 2019 is now available as part of pre-sale on selected European markets, but unfortunately not in Poland. We will most likely have to wait for the purchase until April , when the Nokia 9 PureView will go on sale in Europe on a regular basis.

Fortunately, sales are one thing and the second price. As it turns out, for the Nokia 9 PureView, we will pay PLN 2,599 in Poland , which is only a few zlotys more than in the euro area, where the price is EUR 599, or PLN 2,580. The Polish branch of HMD Global simply rounded the amount, not throwing a hundred or two from each other. Of course, it is possible that until the market launch the price will change, but the chances are small.

Nokia 9 Pureview has one feature that distinguishes this model from the competition. I mean, of course, the main camera consisting of five lenses ! Each eye has 12 MP and light f / 1.82; two matrices are colored and three are monochrome.

Nokia 9 PureView takes five photos at once, then combines them into one, which in theory is supposed to guarantee great detail and a very wide tonal range. I saw a few photos that were made by Nokia 9 PureView and after consulting with Dominik from fotoManiaKa we realized that it really works and the smartphone makes nice, natural photographs without fires . The new flagship of Nokia boasts also a nearly 6-inch pOLED screen with support for HDR10, which has been surrounded by relatively narrow frames. The panel occupies almost 80% of the front, which in current times is only a decent result, but the overall appearance of Nokia 9 PureView and the lack of notch are in my taste. 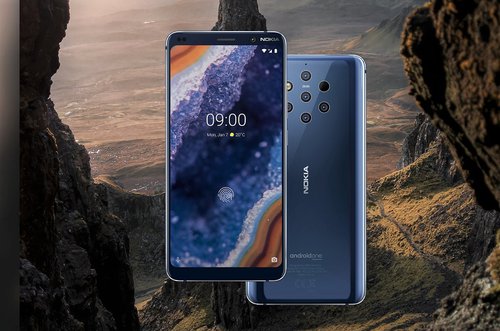 The sensible price of the Nokia 9 PureView did not come out of nowhere – the manufacturer reasonably assumed that last year's Snapdragon 845 will not convince everyone when it comes to an expensive phone. Finns did not skimp on it and gave 6 GB RAM and 128 GB of space for user files.

More information about Nokia 9 PureView can be found in a separate entry: