TEST Motorola Moto G7. I checked if it was the best smartphone in its class

Motorola Moto G7 is a novelty on the Polish market. Our review Moto G7 is to show whether it is worth to buy this smartphone. Moto G7 price is PLN 1199, so the potential owner has the right to demand a lot. Does the Moto G7 meet its expectations?

Motorola Moto G7 is one of four Moto G7 smartphones that have recently made their debut in Poland. This model was priced at less than PLN 1200 . Is it worth to buy Moto G7 with such cash? Please look for answers in my review Moto G7 .


Appearance and quality of performance as in the classical average

The front panel of the tested device is mainly over a 6-inch display , protected with Gorilla Glass 3. The frames are relatively narrow, notch has the shape of a drop of water, and counterfeit at the bottom is quite standard size. Thanks to these measures, the screen fills almost 82% of the front , and the whole body measures 157 x 75.3 x 8 mm. Despite quite large dimensions, the Motorola Moto G7 is pleasantly in the palm of your hand – mainly due to the small thickness and bent edges of the rear panel. It has been made of glass, but the frame is already plastic , although I must admit that it works quite well and without comparison with another phone made of metal it is not easy to notice. During testing Motorola did not catch any serious scratches, but a lot of streaks. Skeins on his back find a new company logo, which was imposed on the fingerprint reader and quite clearly protruding, rounded camera that can be "leveled" with bundled kit pouch. Meanwhile, the power button appears along with the volume control bar on the right side, and on the left … there is nothing. At the top of the phone, look for the SIM card drawer and the memory card, while the bottom edge covers a single multimedia speaker, a 3.5 mm jack connector and a USB type C port. 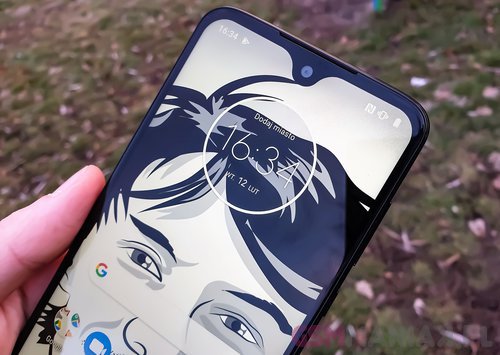 At the very end two words with indentation. Theoretically, it has the shape of the so-called tears, however, compared to Honora 10 Lite is more like a small leak than a droplet, which made it quite difficult for me to pass such a note on the agenda, especially since it can not be masked . I stress, however, that these are subjective feelings.


Screen as usual on the level 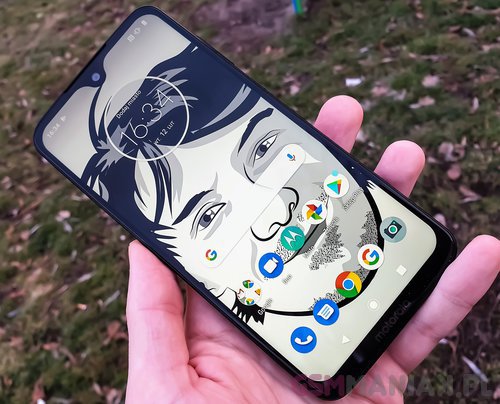 The color reproduction depends on the mode we choose and the options are three: Natural , Enhanced and Saturated . Unfortunately, none of them will satisfy the needs of those who dream of perfect calibration. However, I must assume that the maximum coverage of the sRGB color palette is less than 92% , which for average is simply a decent result, so the colors definitely lack saturation. The plus for the Moto G7 screen is good contrast. I must pay attention to the delicate whiteness of white (less than 7,500). If it bothers someone, all you need to do is set the night light to about 25% intensity to get the perfect, natural effect.


Efficiency. What can Snapdragon 632 do?

We've met Adreno 506 graphics earlier in other layouts, including the once-popular Snapdragon 625. Qualcomm gently improved its capabilities, but the difference in the plus is symbolic and smartphones with SD636 offer clearly better gaming performance that I will not even mention phones with SD660. Fortunately, the GPU's computing power is so good that the Moto G7 does quite well with most games from the Google Play store , of course sometimes better, sometimes worse – depending on the level of advancement of graphics. The basic titles work without stuttering, but for example, PUBG MOBILE advises to set the details to the lowest, so fans of the highest level gameplay should look elsewhere.

Motorola equipped the Moto G7 in the NFC , so we can pay contactlessly with the help of this smartphone. It is true that this option has a lot of smartphones at a similar price, but not all – for example, the often recommended models Xiaomi or Meizu from this price shelf have no NFC, which gives Motorola an advantage over these competitors. Other aspects of communication do not raise major concerns. Wi-Fi 802.11ac operates in the 2.4 and 5 GHz range, providing a stable connection. With a good router, the range is trouble-free even when changing a story. On board there was also USB type C , fast and accurate GPS / A-GPS navigation with GLONASS, Galileo and BeiDou and Bluetooth 5.0, with support for aptX, aptX HD and LDAC. There is also an FM radio. 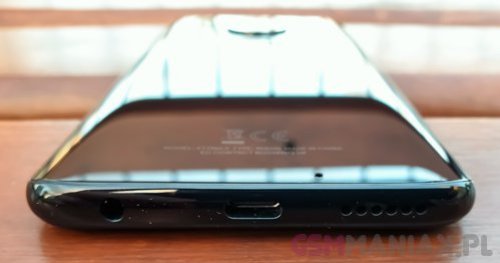 The multimedia speaker is one and placed on the bottom edge. It is a pity that it has not been integrated into the speaker for talks, as in its predecessors. It is comforting that it is really loud and plays clean . Basically, I can say the same about the sound quality on headphones – it's a solid medium shelf. Moto G7 can be secured biometrically in two ways. The first option is a fingerprint reader , this time located on the back panel. It works just fine, both in speed and accuracy. Another option is unlocking the image of our face , which for obvious reasons is less secure, but almost as efficient as possible, if we press the power button earlier – the screen is less effective when the screen is dark. 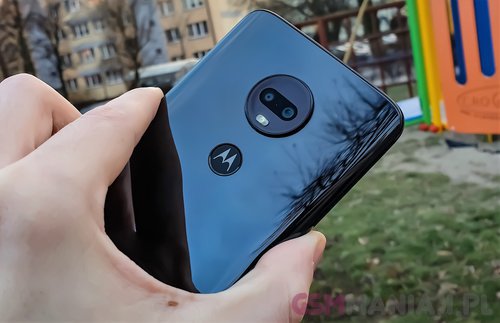 As a Moto G7, it works well. None of my interlocutors complained about the quality of calls, just like me. I did not notice that the smartphone lost its range and access to the network where other models of competing brands did not. A lot of people will be happy that Moto G7 has two slots for SIM cards and a separate slot for a memory card , which is ideal. As far as the space for files is concerned, the average Motorola has received 64 GB of memory, of which we actually get a little over 50 GB .

The tested model works under the control of Android version 9.0 Pie , with security patches dated December 2018. They are not the first freshness, but it could always be worse. Generally, this is a pure version of the green robot, but Motorola has added a few additions that are practical and facilitate the use of a smartphone, but if you do not need them, you can always turn them off. The most important additions are various gestures :

It is also worth noting the presence of Moto Display , or energy-saving notifications on the off screen. In this way, we can view the time, notifications or battery status without having to wake up the device. Moto G7 does not have too many pre-installed programs – apart from Google applications, nothing is striking.


The battery only for the day, but it is fast charging

The turboPower 15W is quick to charge , which allows you to replenish your energy reserves in less than 100 minutes, which is a really good result in the middle class. What's important, we get a suitable charger in the sales set, so a big plus for Motorola is due.


The camera. In its class, a solid four

The relatively low price of the equipment means that you can not count on top solutions in the field of a double camera . While the main mesh is 12 MP (actually 12.6 MP), f / 1.8 light and 1.25 μm pixels, which looks good on paper, the extra 5 MP lens is used only for blurring the background. The camera application also has practical and interesting additions. We enjoy the presence of manual mode in which we can choose the most important parameters of the pictures. Among the modes you will find the option to take pictures with one leading color when the rest of the frame is black and white . There is even a shortcut to Google Lens (Google Lens) that recognizes what the lens sees, scans barcodes and QR and copies text. >>> View full resolution If I were to assess the photos taken with the Moto G7 using a school scale, I would put up a four. In the case of photographs taken under favorable lighting conditions, virtually every possible parameter is at least at a good level . While the detail could be better, such a good dynamics (additionally improved by efficient HDR) and good color reproduction deserve praise. What can I attach to? Mainly to noticeable after zooming in at the corners of the frame . Sometimes the white balance rages, but luckily it's very sporadic. Evening and night shots fall out decently . It is true that they are not very rich in details, due to the strong denoise and sharpening, and also have minor problems with artifacts, but for a lot of them you can see them, and the colors look good. The real weakness of the Moto G7 is the susceptibility to reflections . I could not make a single shot where the street lamps would not look like this: 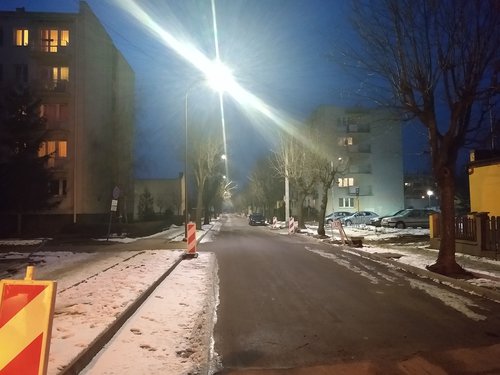 The Motorola Moto G7 points out that it can record 4K (30fps) movies. Importantly, the producer did not forget about Full HD (60 fps). There is also digital image stabilization, but it works only at Full HD (30 fps) and at lower resolutions. It's the movies that are shot with stabilization that look better to me , and they do not seem to be much more detailed than the clips recorded at higher resolutions. For the sake of happiness there is only a shortage of better audio, because sometimes you hear strange crackles and a metallic reverb. 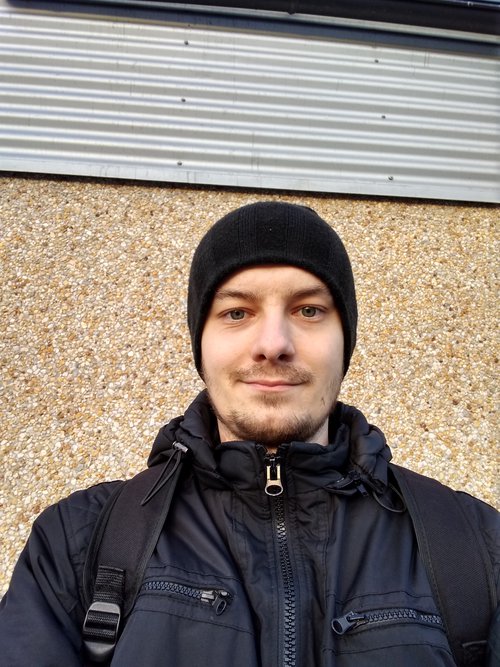 Meanwhile, the selfie camera has 8 MP and f / 2.2 light. We get a beautification mode, HDR and the possibility of lighting the face with a screen, but not autofocus. Self-poses fall out well, if we take care of the right amount of light . I doubt that someone would take a selfie in extremely extreme conditions, so Moto G7 should satisfy the majority of mania.

Motorola Moto G7 is a successful mid-range smartphone that can and does not tempt with strict technical specifications, but has many other advantages. This is undoubtedly a very good choice if has to spend 1200 zlotys , although of course not clearly the best. 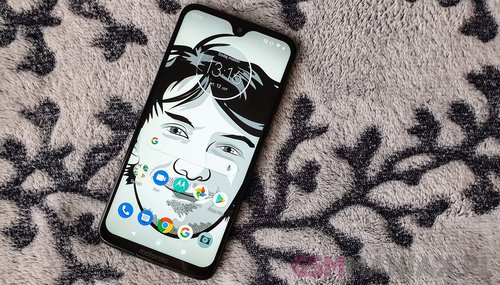 Let's start with the pluses. Moto G7 works very smoothly and satisfactorily fast , having nothing to be ashamed of, not only against the background of direct competitors, but also noticeably more expensive flagships. The processor is not a performance daemon, but it works every day, which is probably the most important thing. You can only attach to the power of the GPU, which has long been behind the glory years. The screen deserves a small plus , which defends itself the most in its class. A camera is also decent, but above all in favorable lighting conditions. In the evening or at night it is even tolerable, but what happens on such photos with artificial light sources, cries out for vengeance to heaven. The battery could be better . It is true that the 3000 mAh link allows for sensible performance, and TurboPower charging allows for quick replenishment of energy, so 5h SoT can hardly be considered a fully satisfactory result for a demanding user. On the plus side is the presence of NFC and USB type C, and the minus notch, which I do not like very much. 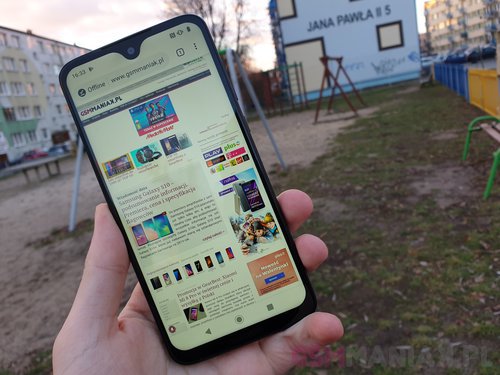 Despite some imperfections, I think that 1199 zlotys for Moto G7 is a reasonable valuation and you should consider buying this equipment, and even more worth waiting for the first promotions. Two hundred pennies and the new Motorola Medium will be worth the price without any major "buts".

Is the Motorola Moto G7 the best smartphone in its class? I do not think, however, this model defends itself in many fields. If you are still looking for something different for similar money, I can recommend you, among others Honora 8X, ASUS ZenFone Max Pro M2 or the old, but Xperia XZ1. [show_rating]