Orange is triumphing again! Here is the 2018 mobile internet ranking in Poland

The RFBenchmark website has published a year-long ranking of operators offering the fastest mobile Internet in 2018. In the first place went without surprise, but the overall winner had to give up in one of the categories. Check which operator has praised the best internet last year.

The latest RFBenchmark platform is extremely extensive and apart from the best results of download speed, data sending and pinging value, it includes a distinction for three voivodeships and a description of investments made by operators over the last twelve months. Data about the parameters and speed of the network come from the users of the dedicated application, who performed a total of 301 930 measurements , running tests and using the program in the background, during ordinary activities. Let's check the network classification and get to know the main triumpator, as well as further ladder rungs, which turned out to be a fierce battle between the two operators.


Orange is the best mobile operator in 2018

Orange, the main winners from previous years: 2016 and 2017, once again stood on the top spot of the podium. Orange managed to win in two of three categories, and its main competition was T-Mobile, which showed a better result in one of the competition. The overall result of the service is created on the basis of the results in three measurements: the average speed of LTE data download, the average speed of sending LTE data and the value of ping. 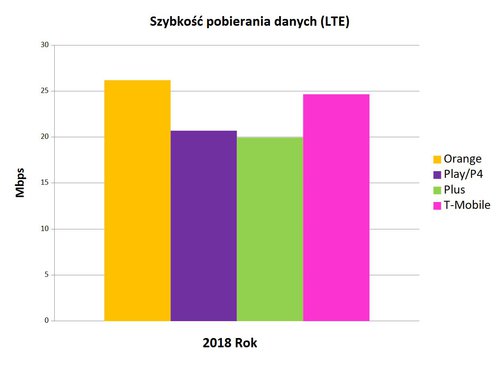 Looking at the average speed of LTE data download, we note the best result of Orange , which managed to achieve 26.19 Mb / s per annum. In addition, the network dominated this category in the previous two years, and the highest result was recorded in August this year, accelerating to an average of 34.53 Mb / s. T-Mobile came in second with a slightly lower result of 24.66 Mb / s, which promises well for the future, while on further levels they ranked Play (20.7 Mb / s) and Plus (19.95 Mb / s respectively). ).


The average speed of sending data 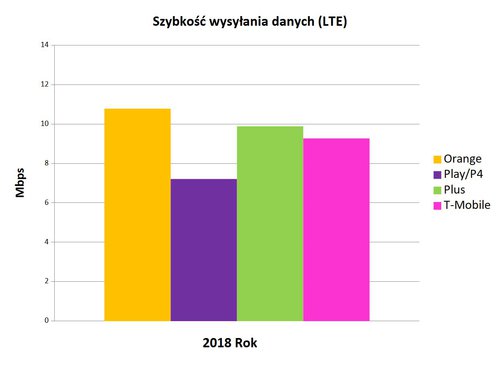 
The lowest value of the pingu 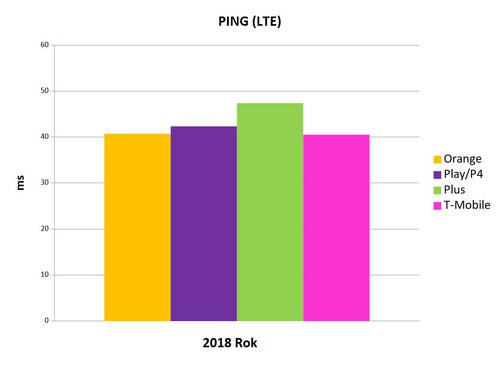 
The 3G network belonged to T-Mobile

Slower, but still widely used network in 3G standard is the domain of the Pink , who outclassed Orange and in the category of data download speed scored a high 5.83 Mb / s. Immediately behind them were: Orange (4.43 Mb / s), Plus (4.03 Mb / s) and Play at a speed of 2.63 Mb / s. The speed of sending 3G data also belonged to T-Mobile, in this case the differences are even smaller. In the skirmish with the ping the best results were once again won by the operator under the pink flag.

The website has decided to extend this year's ranking by providing more accurate information about Polish regions and their best or worst results. Starting with the best quality of mobile internet, the high average speed of data download can be proud of the Silesian Voivodeship , which managed to download files at the level of as much as 61.62 Mb / s. It's all thanks to Orange technology. For a change, the north-western part of the country is Play territory, although there are no spectacular results. In this part of Poland, the inhabitants of the Lodz region had the most to say – there was a 23.97 Mb / s rate in Play. The weakest category in this category was the Lubelskie Voivodeship , where 14,38 Mb / s was calculated on the Play network.


The average sending speed is the best in Wielkopolska In the Wielkopolska region, the best result can be seen in the Plus network, whose green link has ensured uploading speed at 23.87 Mb / s. The Greens also triumphed in five other provinces, including Mazowsze. The weakest results were again noted by the Lubelskie Voivodship – among all the operators there won Play, reaching a speed of 5.59 Mb / s.


What do you think about the speed of the internet in your region?

The full RFBenchmark ranking, including the description of the investments of individual operators, you will find on this page. Write in the comments, how do you remember the year with your mobile operator and what you think about the quality of the internet in your province. Source