Here is another result of Snapdragon 855 in Geekbench

The Snapdragon 855 system will meet it inside many flagships in 2019. The performance of the chipset has recently revealed Sony Xperia XZ4, showing off the fantastic result at Geekbench. It so happens that the network has another result.

Do we need more speed?

The performance of smartphones is a river theme, but this year promises to reduce its depth to the level of the knees. By that I mean less and less perceptible differences in the practical speed of telephones, which increase in proportion to the improving processors. Nowadays , even middle-classers boast a satisfactory speed , while only flagrant tests and direct comparisons make sense in the flagship group. Recently Damian showed in his text the advantages of cheap smartphones, which do not lack power or the necessary background. https://www.gsmmaniak.pl/929936/tani-smartfon-to-dobry-smartfon/ Despite the fact that we have already achieved a satisfactory level and culture of work, progress will not stop at the site and will offer even more in the future. We can see it even after the power of the newest Snapdragon 855, which not only wins the competition this year, but is also a big improvement compared to its predecessor. The truth is that most of this power is not able to be used in basic tasks and soon we will stop noticing any differences in the speed of telephones.


Construction of cores from the kitchen

Qualcomm Snapdragon 855 was made in the 7 nm lithographic process, which ensures first of all better energy efficiency and reduced size of the system. The manufacturer built it with eight core, whose configuration looks like this:

It's the results of the best processor of the year, and its effectiveness is confirmed by another score in the test base. This time we did not know the name of the smartphone, but the numbers, which are respectively: 3545 and 11150 points. 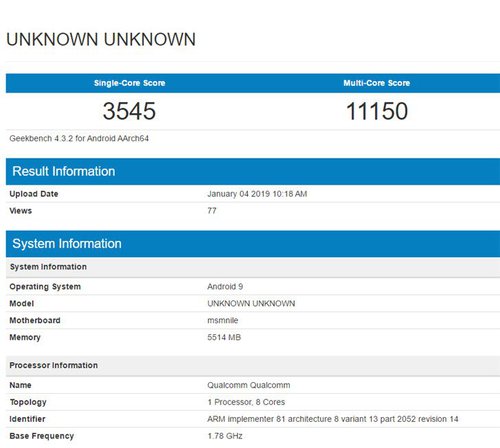 It is worth noting that they were obtained using 6 GB RAM, while the flagship Sony needed two gigabytes more. How does Snapdragon 855 fall out of the competition? The best of all devices with Android and better than the Apple A12 Bionic, however, the corporation CPU from Cupertino should give better results in the test of one core. Source