Samsung announces a truly frameless mid-range smartphone without a note!

Samsung has just suggested that in the near future will present a mid-platter smartphone called Galaxy A8s, which will receive a frameless screen without a note! The selfie camera will probably be placed in a small hole in the screen. It seems that this is just an introduction to Galaxy S10.

Notch dominated the smartphone market. Few producers resisted his (doubtful for me) charm, although of course there are some exceptions, such as Sony, HTC or Samsung. It is this last company that seems to be an enemy of the notion known to us, because it quite often criticizes. In this situation, I do not think the Koreans would suddenly start copying this solution and they seem to have invented something else.


Samsung does not want to note

A few days ago, we wrote about Samsung's plans for the design of Galaxy smartphones for the coming years. Among them there was no note , because all technological assumptions were aimed at creating a frameless smartphone with sensors hidden in the screen, including a selfie camera, inclusive. To make this possible, the pixels in the display will become transparent when taking a picture. Generally, it sounds quite expensive and probably Samsung will leave this solution for the future, even for the premiere of Galaxy S10 / Galaxy Note 10. Meanwhile, a different, frameless smartphone without a note and a member of the Galaxy A medium- shelf family will be available soon!


Galaxy A8s with a hole in the screen?

At the party in China, Samsung revealed that at the beginning of next year will debut Samsung Galaxy A8s , which has no frames. It is not known what the manufacturer has in mind, because as we know different companies have a different approach to framelessness and sometimes you can see the unused space around the supposedly frameless smartphone. In any case, there are voices that the Galaxy A8s will get the Snapdragon 710 processor, and its display will actually take a great part of the front. What will happen with the webcam on the front then? Apparently the answer is not notch , and the keyhole in the screen – looking more or less the same as in the leading graphic at the top of the entry. 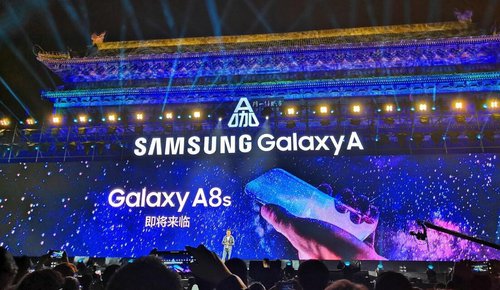 Of course, this is not confirmed information, and in the teaser shown by Samsung you can see a frameless smartphone without any cut-out, hole or anything else. Perhaps the manufacturer will actually test the transparent pixels in the Galaxy A8s, so that if you can successfully transfer this solution to the flagships? Probably is something else: Samsung does not really create a smartphone with a note , and at most with a hole.