Huawei has announced a great and powerful Mate 20X. It will not be an ordinary smartphone

Huawei is preparing for the launch of Mate 20 smartphones. As it turns out, this series will consist not only of Mate 20 and Mate 20 Pro, but also Mate 20X – a powerful smartphone in many respects for players.

Already on October 16, exactly one week, Huawei will officially show the world smartphones from the flagship series Mate 20 . It will include the standard Huawei Mate 20 and the more bloated Huawei Mate 20 Pro. Gossip also talk about the new edition of Porsche Design, but it's not certain. Now Huawei has announced something else – the premiere of another device from the Mate 20 family: https://twitter.com/HuaweiMobile/status/1049332264038006785?s=19 Huawei Mate 20X will be the next smartphone on the market, which was created for fans of mobile games. The above video suggests that the device will be equipped with an advanced cooling system to make the game fully comfortable even for a long time. Turbo GPU technology will also help, which actually improves graphics performance, although to a lesser extent than the manufacturer wants. Unofficial information says that the Huawei Mate 20X will be equipped with a giant, as many as 7.21-inch OLED panel with Full HD + resolution (2240×1080), unfortunately with a note . It is a pity that the producer did not decide on a higher resolution, because with QHD + the sharpness of the displayed image would be noticeably better. The OLED panel will not allow you to refresh in 120Hz – so far no one has created such a screen for smartphones. In the weakest configuration, the Huawei Mate 20X should offer 4 GB of RAM and 128 GB of internal memory, while in the strongest, as much as 8 GB of RAM and 512 GB of memory. Of course, there will also be other variants, and their availability will depend on the market, just like the telephone itself. https://twitter.com/Lopez74Jara/status/1049339707413417984?s=19 The heart of the Huawei Mate 20X is to be the Kirin 980 , which is obvious – it is the most powerful SoC in the Huawei portfolio. The unit is built of four very strong Cortex-A76 cores operating in pairs (with maximum clock speed up to 2.6 GHz) and four supporting cores Cortex-A55. The graphic layout is Mali G76 MP10, and the whole was made in a 7nm technological process. The Kirin 980 is a very strong SoC, but it will not let Huawei Mate 20X jump away from other smartphones for players with Snapdragon 845. In AnTuTu, the new Kirin turns just 20,000. more than Xiaomi Black Shark, and this is quite a symbolic difference. Unfortunately, that's all we know about Huawei Mate 20X. We will have to wait for further details.

By the way, I have important information about Huawei Mate 20, especially Huawei Mate 20 Pro. An image appeared in the network, which shows a list of screen parameters in three new Huawei products: 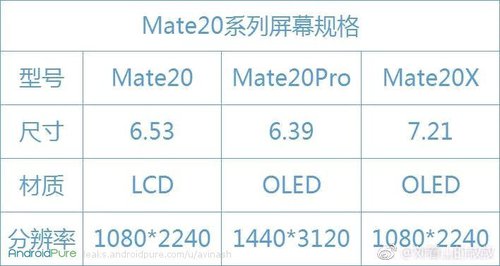 It seems that Huawei Mate 20 Pro will not get as much as 6.9-inch screen, and a little more handy, 6.39-inch panel . A similar value was once reported by one of the tested leaksters , so that's basically certain. Source: Huawei, Android Pure