Honor Play or Xiaomi POCOPHONE F1? Which smartphone to buy?

This is probably the hottest clash this fall – Honor Play versus Xiaomi POCOPHONE F1. Both smartphones cost less than PLN 1,500, but only one will come out of this match.


OnePlus 6 vs POCO F1 – a comparison of the specifications

Housing and appearance: metal vs plastic 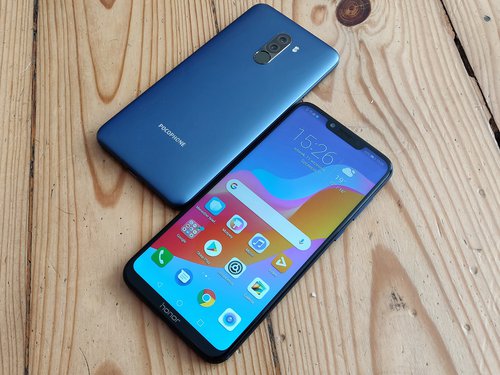 Honor Play rear panel is made of metal covered with a pleasant to touch paint that makes the surface perfectly smooth. The producer should be a plus for phenomenal incorporation of antenna strips, which are not at all conspicuous. They are arranged in the letter U and placed on the top and bottom edges. In the case of POCO F1, we get slightly less attractive materials , because Xiaomi decided to make a housing made of plastic (polycarbonate). The front panel in both models is very similar – display with rounded corners and indentation, Selfie camera, ambient light sensor, speaker for talks and diode notifications. Of course, these elements are located on the indentation in the screen, in addition to the notification LED in POCO F1, because it was placed on the bottom edge. It is worth paying attention to one aspect – the frames on the Honor smartphone are slightly slimmer . Honor Play is a smartphone slighter, thanks to which it lies much better in the hand, and is lighter . It's also better to present, although it's obviously a matter of taste. If you look at the notch you will notice that the POCO F1 is clearly larger , although the cut in the Honor Play is not the smallest one. The layout of the elements on the housing is standard on both models – on the right side there is a switch and a volume control bar above it. They are placed at the appropriate height, so you do not have to move the smartphone in your hands to increase the volume. The tray with the hybrid SIM card slot is on the left side, and the secondary microphone on the top frame. The lower edge was occupied by a microphone, a USB type C port and a multimedia speaker. The only difference is the location of the 3.5mm mini-jack, which in the Honorus is on the lower edge, and in POCO F1 on the upper edge. Regardless of the components used to manufacture the housing, both smartphones have been made with due care . POCOPHONE F1 and Honor Play received round biometric sensors that were located on the back wall . In both models they are at the right height, therefore unlocking the smartphone with the use of this biometric security is not a problem. In the case of construction, it is worth paying attention to the islands for the main cameras. This in the POCOPHONE F1 is much less protruding and is located in the middle at the top of the rear panel, while in the Horze Play it is located in the upper left corner. 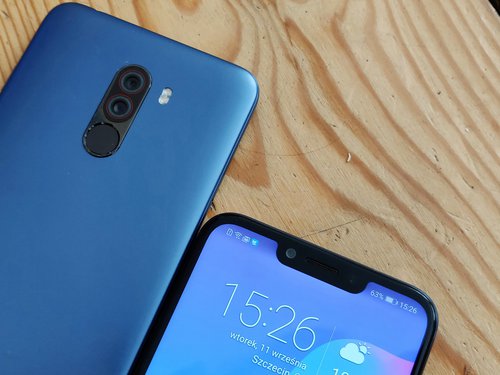 In terms of battery parameters, the POCOPOHONE F1 falls out on paper better than a competitor . The Xiaomi smartphone has 4000 mAh cells, while the Honor Play has 3750 mAh. Both smartphones kept up my pace for an average of two days on a single charge cycle, although this POCO F1 at the end of the second day had a supply of energy which, with economical use, would allow it to be kept until the middle of the third day. [test slug = "battery" order = "desc" selected = "22710,22700" virtual = "pcmark-work-2" type = "single" product_id = "22710,22700"] [test slug = "battery" virtual = "loading-ac" order = "asc" selected = "22710,22700" type = "single" product_id = "22710,22700"] Of course, both models have energy saving modes , ranging from a simple one that reduces screen brightness and reduces data transmission and ending with an extreme limitation of the device's functionality. All this to maximize the working time on a single charge cycle. Honor Play also allows you to lower the resolution to HD +. Both phones are able to quickly replenish their lost energy, as both models have a fast charging technology – 9V / 2A 18W (Quick Charge 3.0) for POCO F1 and 9V / 2A – 18W in the Play Halo . Completing the energy in the Honor Play to 100% with the charger included in the kit takes 95 minutes, and POCO F1 needs about 10 minutes more.


Screen: POCO has a better panel 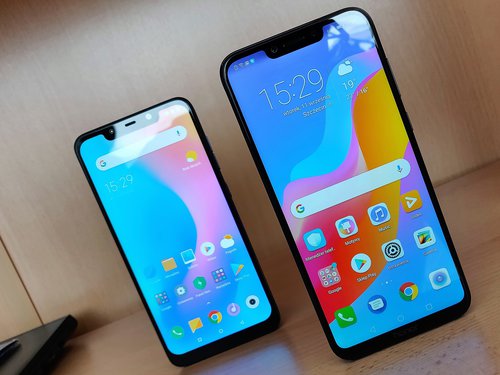 The Honor Play smartphone uses a 19.5: 9 display, which is characterized by a diagonal of 6.3 "and a FullHD + resolution of 2340 x 1080 pixels. With this characteristic, the panel made in IPS technology has a density of dots per inch at the level of about 409, which is a value suitable for comfortable consumption of content. There is no question of ragged fonts and blurry images. POCO F1 received a screen with a diagonal of 6.18 inches, FullHD + resolution (2246 × 1080) with an 18.7: 9 ratio, which was made in IPS technology. The density of pixels per inch is around 403. For both smartphones you can talk about very good readability and high comfort of use – these panels are suitable for browsing the Internet, as well as playing or watching movies. They are simply universal .

The maximum luminance of the screens is at the appropriate level, so that the use of smartphones even on sunny days is not a problem. I also have no objections to the operation of existing light sensors that efficiently adapt the backlight to the current lighting conditions. [test slug = "test-colors" order = "desc" selected = "22710,22700" virtual = "color-adobergb" type = "single" product_id = "22710,22700"] [test slug = "test-colors" order = "desc" selected = "22710,22700" virtual = "color-srgb" type = "single" product_id = "22710,22700"] [test slug = "screen-battery" virtual = "TEST_JASNOSC_AKU" order = "desc "selected =" 22710,22700 "type =" single "product_id =" 22710,22700 "] Display in the Honor of Play occupies 83% of the front panel , which is a very good result considering that the matrix in POCO F1 occupies ~ 82.2%. These differences show that the Xiaomi smartphone received a slightly wider frame. In the settings of both models, we can find eye protection , which after activation is designed to reduce the emission of blue light, and thus less tiring eyes. We can independently control the intensity of the yellow color. 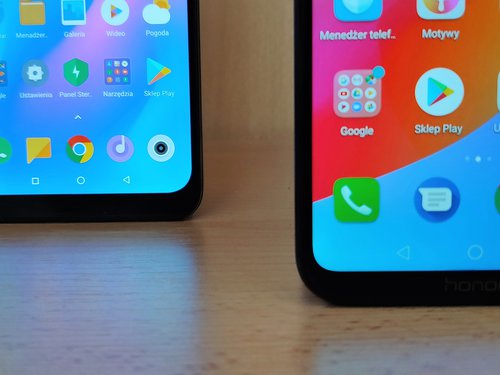 As you probably already know, POCO F1 has problems with discoloration, and therefore I will not once again resolve this problem. Instead, it is worth comparing the calibration of both panels, and this in the case of Honora Play falls "pale" against the background of Xiaomi. The color reproduction in the AdobeRGB palette is 66.4%, and in the case of sRGB it reaches 90.6%. In this respect, Honor Play performs much worse than POCO F1 – AdobeRGB – 81.5% and sRGB -97.5%. So you can see that on this component Huawei wanted to save some money.

Both smartphones are equipped with dual lens cameras . However, they differ not only in the amount of megapixels. 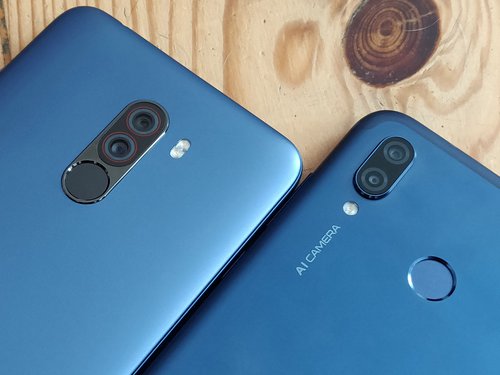 The main camera in the Play Halo has 16MP , and the lens has a brightness of F / 2.2. The equipment is also equipped with an LED lighting diode. There was also a rapid focus measurement (PDAF) and electronic image stabilization (EIS). The additional lens is a 2-megapixel sensor with f / 2.4 light. Thanks to the artificial intelligence of the NPU, Honor Play identifies 22 categories and analyzes over 500 scenes in real time. The smartphone is able to recognize and correct various parts of the body when taking pictures.

In the case of POCO F1, we have a stronger set. The main sensor is Sony IMX363 with F / 1.9 light and 1.4μm single pixel size. For the measurement of focus, the Dual Pixel AF technology was used. The additional camera has 5 MP, F / 2.0 light, and is characterized by the size of a single pixel at 1.12μm.

-> See the example photos in full resolution https://www.youtube.com/watch?v=dFJ6yO4PcgY Although both smartphones are great at shooting in favorable lighting conditions and are able to take photographs full of details, sharp as well as with well-reproduced colors, it is however POCO F1 has more natural pictures . Honor conquers colors programmatically, which can not be liked by everyone. More visible differences, however, can be seen only in the night scenes, when the light comes to the lens less. Then also POCO F1 falls out better . There is more visible noise in the Play Halo, although the focus measurement sensor still responds efficiently. On both smartphones, movies can be recorded in a maximum 4K resolution. Of course, it is also possible to record recordings in FHD resolution, although 60fps only offers Honor Play . Not only that, Honor Play also has a better focus measurement – autofocus copes well with sharpening, which is not so obvious in POCOPHONE F1. Sometimes he has problems with it. However, I think that this is to be eliminated with appropriate updates. 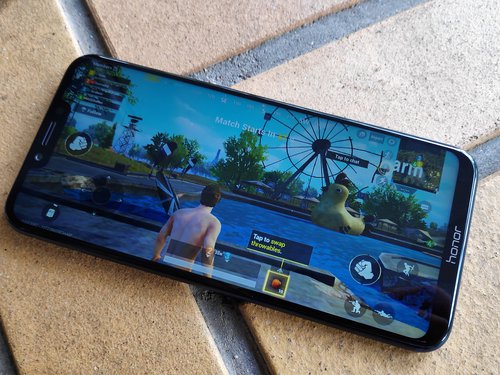 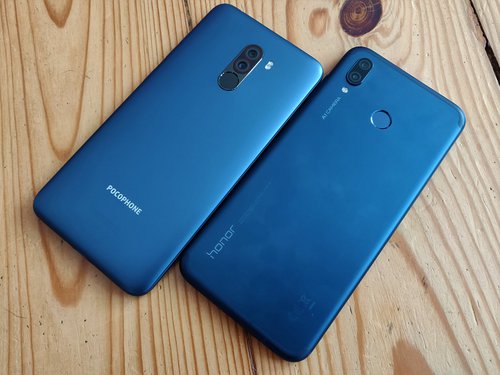 In POCO F1 there is a WiFi standard 802.11 a / b / g / n / ac (2.4 and 5 GHz, 2 × 2 MIMO), Bluetooth 5.0 with aptX & aptX HD, GPS with GLONASS, Beidou and USB type C. In the case of Honora Play, we have almost the same. The exception is Bluetooth 4.2. A significant difference between POCOPHONE F1 and Play Honor is the presence of NFC in the latter , and therefore it is possible to make contactless payments. POCO F1 has an FM radio and stereo speakers. If you are looking for a smartphone for games, NFC will not be needed, but good sound and yes. On the other hand, NFC is becoming more and more popular, so it should be even included in the POCOPHONE F1 equipment.


Honor Play or POCO F1? What to choose?

After reading this comparison, the choice seems obvious. Although I have great affection for the Honor sub-brand and Huawei smartphones, I must make it clear that POCOPHONE F1 won this match and proved to be a better buy. Honor Play   in almost every category it ranks behind the Xiaomi model. One can only regret that the POCOPHONE F1 components were not enclosed in the Honora Play housing, because then we could talk about the ideal smartphone. One that undermined the sense of buying a flagship because it is really very good at everything. Of course , NFC and optical image stabilization are still missing happiness , but it is known that at PLN 1499 you can not have everything. And although I think that in this comparison, Honor Play is a worse smartphone, it is objectively also a very good mid-range proposition that will satisfy even the demanding consumer. 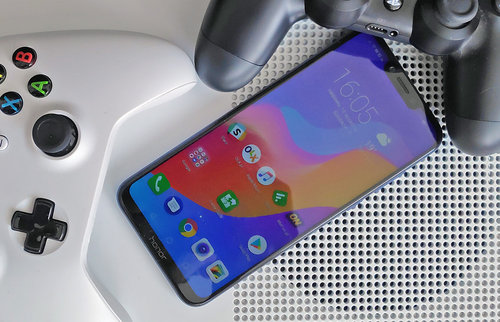 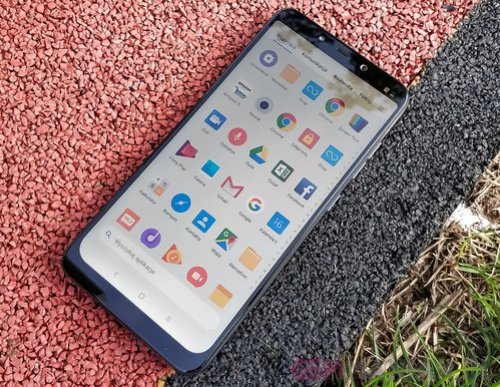