Xiaomi is working on a smartphone with Snapdragon 638

Xiaomi Valentino is the latest smartphone of a Chinese company, which, thanks to GeekBench, revealed some information about itself. It promises to be quite interesting, because the unannounced SoC system from Qualcomm is to be equipped.

The Xiaomi Redmi S2 will soon be debuting, and therefore the middle class smartphone, which in many respects refers to the Xiaomi Redmi 5 Plus. However, this is not the only medium that Xiaomi wants to present in the near future, as the smartphone with the code name Valentin o, which seems to be the direct successor of the Xiaomi Redmi Note 5 (AI Dual Camera), has been noticed in GeekBench .


Performance at a good level

GeekBench revealed that Xiaomi Valentino will be a mid-range smartphone. It will be a higher middle class due to the use of an 8-core processor clocked at 1.44 GHz and 6 GB of RAM . The so-called SoC is not to be presented yet Qualcomm Snapdragon 638 , which is to be a refined version of the popular Snapdragon 636 used, among others, in Meizu E3 and Xiaomi Redmi Note 5 (AI Dual Camera). The smartphone during the tests worked under the control of Android 8.1 Oreo, which in the final version will be modified by the manufacturer by applying the interface overlay – MIUI. It is very likely that Snapdragon 638, just like its predecessor equipped with Kryo 260 cores. However, it is not clear if Qualcomm will decide to use them in the 4 + 4 configuration, or whether it will add some other cores to it. 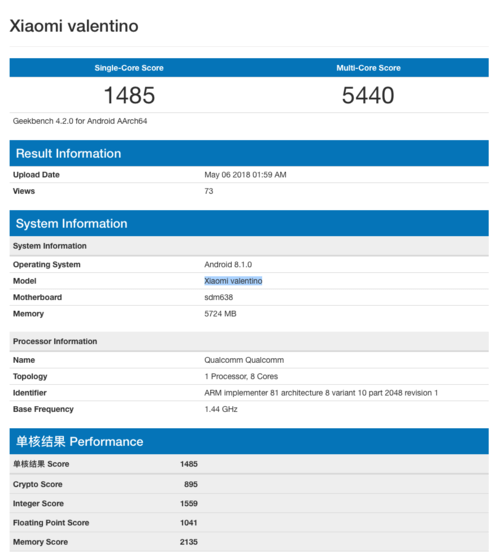 This combination should ensure a high culture of the device , because in the test of a single core it allowed to gain 1485 points, and the multi-core test ended with the result of 5440 points. So here we have very good notes, which clearly indicate the class of the device. More importantly, the upcoming Xiaomi Valentino will be better than the devices with Snapdragon 636, because the Meizu E3 in the same tests obtained the following results: Single-Core – 1327 points, Multi-Core – 4872 points.


Will Xiaomi Valentino be the successor of the Xiaomi Redmi Note 5 (AI Dual Camera)?

At the moment it is not clear when the new Xiaomi smartphone will debut, and even more so under what name it will appear. However, it can be assumed that it will be an improved version of the Xiaomi Redmi Note 5 (AI Dual Camera), although this is obviously pure speculation. There is nothing left to do but wait patiently for the next reports in the case of Xiaomi Valentino.