The Samsung Galaxy Note 8 is definitely a great smartphone. Just why the company advertises it in a way that does not indicate maturity. See what exactly this is about.

Not today we know that the squabbles between companies can be interestingly pursued . Marketing war between the two car manufacturers was once a good example. However, in the mobile industry, it may seem more and more difficult to have an interesting and creative "circumvention" of the competition and to show the advantages of its own products. On the occasion of the release of Xiaomi Mi Mix 2, the company mocked the most from the design of the iPhone X, which did not debut yet. Recently, Huawei has been tempted to lightly tap on Galaxy smartphones, launching the Note 8, and later hit Apple in the flag. It turns out that Samsung is in the same direction now. Scrolling through the news feed on Facebook, I was shown the Samsung Galaxy Note 8 ad. On the large size graphics we have the word " 3.5 mm Stereo " – of course, the mini-jack input and stereo sound available in this smartphone. We also have a signature that the material has been prepared based on proven technical information, which is sure to be secure. To tell the truth, there is nothing extraordinary about it. Just look at the graphic description to read, " Is the Smartphone, which is so loud lately, an audio jack? Because ours has: ". 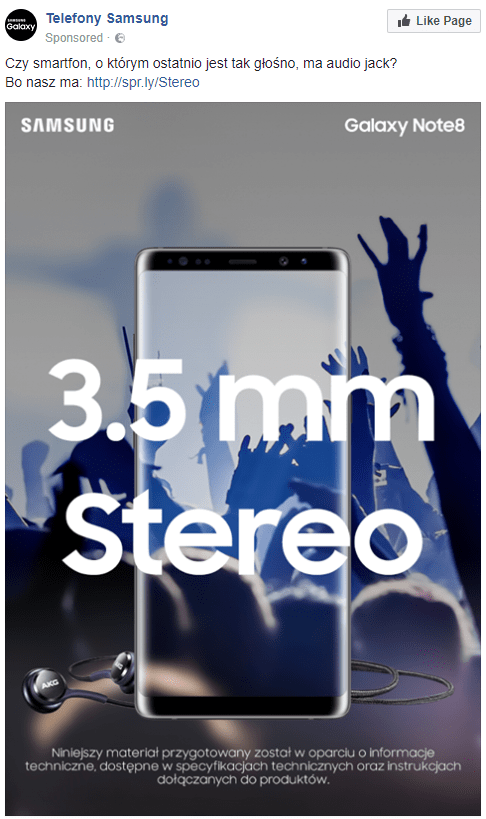 Speak of course, of course, and it's easy to think that it's about the iPhone 8 and iPhone 8 Plus. Especially since on Friday they started selling in Poland. There were supposed to be queues in iSpots – you can see them on this movie . Many of the comments under the ad indicate that the "splash" in the style of "mine is better because" is not suitable for a company like Samsung . For others, it shows the immaturity and underestimation of the product itself through the child's comparison of only one function. For me, advertising is neither brilliant nor very malicious. The problem, however, is that it positions Samsung lower than Apple by the same comparison, which is clearly highlighted in the message. I think the company can afford better marketing, because such passwords will not attract many well-informed consumers. Do not delude yourself who will buy Note 8, which in the basic version costs more than the iPhone 8 Plus in the Polish shop. Taking all this into account, I believe that this ad is irrelevant. And what is your opinion on this subject? Source: own